I'm all about Cooking Light recipes all the time. Hopefully you will find something that peaks your interest and inspires you to use Cooking Light everyday! 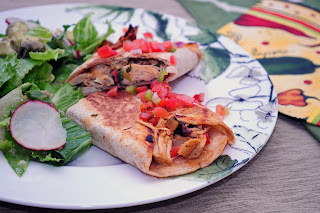 Talk about a super easy weeknight meal!  This came together so quickly and all we needed was fresh salsa, rotisserie chicken and tortillas!

Burritos are typically made with rice. This version is lightened by removing the rice and using only chicken, beans, salsa and cheese.

I don't have much to say about this--it's that easy.  I might also be stuck on the deliciousness that were the browned banana bars. They were that good.

We didn't make any changes to the recipe.


You could keep all of the items in this recipe stocked in your house (thawing frozen chicken and cooking it over the weekend) to really make this a pantry-ingredient meal.


As of today's post, seventeen people gave this an average rating of four out of five.

Posted by the VA foodie at 9:55 PM No comments: 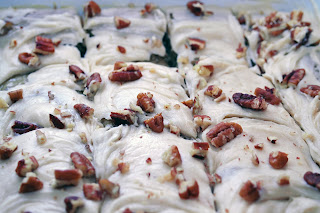 See those fluffy clouds? This is what heaven looks like.  I know you're thinking, "If this is heaven, what are those nuts on the clouds?" I don't have an answer for that.  All I know is that this has easily become one of my top five dessert recipes. In the word of Barney Stinson, it's Legend wait for it.....

DARY! (Legendary for those who do not watch How I Met Your Mother).

Your next question is probably "why did you take this picture?" and "where's the inside?".  The sad truth is that I underbaked these. So much so that they were nearly raw in the middle.  I checked it (using the tooth pick method), and they looked baked to me, but sadly, they were not. I had already frosted them before I realized they were underbaked.  So what did we do? We ate every last bite of the baked parts, and some of the unbaked parts.  It was that delicious.  I seriously cannot wait until I have another opportunity to make these, they were that good. If you're a fan of browned butter, you will notice it in the frosting.  I would use this frosting on anything and everything.


As of today's post forty-two people gave this a five out of five!!!!!!


All I know is that my friends better have some good summer parties lined up so I can bring these.

Posted by the VA foodie at 9:45 PM No comments: 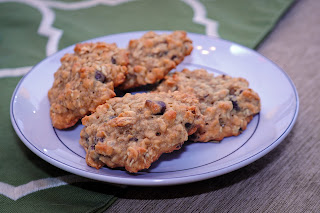 I bought a bunch of bananas with the goal of making two different banana recipes this week. I couldn't decide which one I wanted to make and had enough bananas to make both. In Greece, they would say this is my destiny.


I also came to the realization that homemade cookies are way better than store-bought cookies.  OK with the caveat that Oreos are the exception because let's be honest with ourselves, they are the end-all be-all of cookies.  We had the Keebler rainbow M&M's cookies (the ones with exactly 3 M&M's per cookie) and they tasted like cardboard.  That's when I realized I wanted to make these cookies and put the calories toward something much more delicious (and probably nutritious).


Enter super ripe bananas. This recipe came together so quickly--mix all together and bake.  I didn't make any  modifications to this recipe except to underbake the second and third batches in the oven. I like my cookies a little underbaked and soft.


They were delicious. Chewy, soft and flavorful--everything I had hoped for.  The good news is that these also freeze well, so you can pull one out of the freezer as you want it.  It's the self control that is the difficult part. :)


As of today's post, 37 people gave this an average rating of four out of five stars.

Posted by the VA foodie at 9:30 PM No comments: 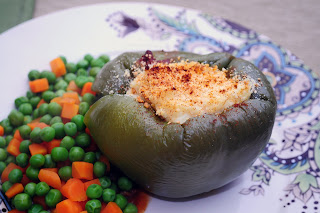 And now, an homage to my roots.  Shepherd's Pie is traditionally made in a pie crust with a layer of meat and vegetables, topped with delicious mashed potatoes.  The problem is that if we ate Shepherd's Pie once a month, we would probably have high blood pressure and cholesterol.  We barely even have the real thing once a year--I requested it as my special birthday dish this year. The hubs made the family recipe and it was delicious!  So having that fairly recent memory in my head, how did this light version measure up??


First, if you look at the recipe you'll notice that we have the peas and carrots on the side when they should be in the peppers. Oops. It was a Top Chef improv moment, and it turned out ok.


I thought this was delicious!  I made sure to cook the peppers to near exhaustion, so that they would be sure to fall apart with the light touch of the fork. :)  It was a great way to have a taste of Shepherd's Pie.  The best part? Only two servings. That way you're not stuck with a weeks' worth of fatty, salty, delicious, unhealthy leftovers.


As for the alterations, we clearly left out the peas and carrots but cooked them as a side dish.  Additionally, we used ground beef instead of lamb or sirloin.  Based on comments from other reviewer, we also swapped refrigerated mashed potatoes for the frozen ones.


I would make it again but when asking the other half of this duo, he replied 'I like the regular version better'. Duh cause it's laden with a heavy (but delicious) pie crust.  If you're looking for a quick fix, this will get it done.


As of today's post, two people rated this a four out of five. I would agree.

Posted by the VA foodie at 9:18 PM No comments: 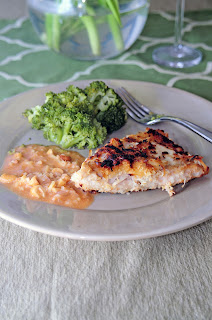 Now that's an alliteration if I've ever heard one.  Try to say that 10 times fast!

I've been intrigued by this recipe ever since I saw it in my subscription to Cooking Light.  I'm not a big fan of coconut but I like coconut shrimp and thought this might be similar.  The recipe does have a lot of ingredients but most of them we have in our pantry. I think I only needed to buy chicken for this recipe.  You might not have as many ingredients in your pantry, and may be turned off by the number of ingredients, which I understand.

I'll save you the trouble of buying the ingredients, this was another 'meh' recipe.  Now I will say that I like bold flavors, so if you like delicate flavors this may be your dish.  The chicken was delicious, I would make it again and serve it with another sauce.  And I probably would, if Cooking Light didn't have a bunch of other similar recipes that are panko-coated chicken tenders.  I expected way more flavor out of this sauce and was let down.

As of today's post, 18 people gave this an average rating of four out of 5.

This is probably one of those 'decide for yourself' type of recipes. It's not awful but I can see how some people might like it.

Posted by the VA foodie at 7:37 PM No comments: 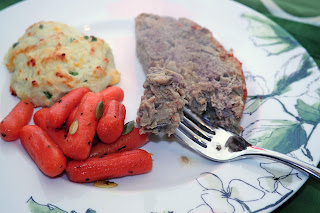 Slow cooker meatloaf, sounds like a match made in heaven right?  This recipe calls for you to cook the loaf in the slow cooker for 5 hours on low.  Cooking anything that long will result in a very moist and tender piece of meat.  We served this with cider glazed carrots from Wegman's and 'my heaven'.

The shiitake mushrooms in this are great.  As other reviewers noted, they add this earthiness to the meatloaf that makes it tasty.  Having said that, the rest of the recipe gets a big fat 'meh'.  The 'sauce' only coats the top layer of meatloaf, meaning that you only taste the sauce in every fourth bite.  The sauce itself is quite tangy, so I would suggest doubling it and stirring half into the meatloaf itself.

Would I make it again? nah.  I'll stick to our favorite, Italian Style Meatloaf instead.

As of today's post 11 people gave this an average rating of 4 out of 5.

So, give it a shot and let me know if you agree. If you really want to make meatloaf that's worth your while though, go with the Italian Style. I can't believe I haven't even blogged about that recipe yet. It is one of the best ones we have.

Posted by the VA foodie at 7:26 PM No comments: 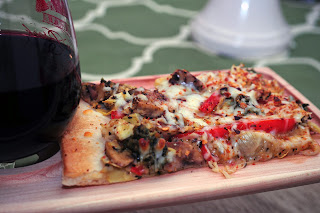 Ah pizza, the American staple.  Well believe it or not this pizza is meat free.  Wait let me just double check that....yep no meat in this pizza.

Given that this pizza has 0% meat, I was fairly certain that this would be one of those meals that my husband ate just to appease me. For him, pizza with no meat is like breathing without air.

I guess they say you never stop learning things about your partner.  He loved it!  I'll admit I loved it too, but I was in such shock that he loved it that I thought I might have been dreaming--or that he was just saying it was good to make me feel better.  But he had a genuine love for this pizza.  Normally Cooking Light cuts back on the cheese, which is one method they use to make things 'lighter'. However, I felt like this was a great amount of cheese to pizza ratio.  The recipe used up most of a bag of shredded mozzarella.

Like other reviewers, I bought fresh mushrooms and sauteed them with the red peppers.  See those green spots? I also added some homemade pesto, from another great CL recipe (seen here).  It really took the recipe to an awesome level.  How do I have fresh pesto in the winter when basil is not abundant? Simple silly, I freeze it and thaw some whenever I need it.

This recipe was designed as a party appetizer, with 16 servings total.  We split this into 8 servings instead, to make it more of a meal portion.  The only caveat I would mention with doing this is that the crust isn't tough enough to hold a 'slice'.  So next time we will up the time on the pre-bake of the crust to see if that works. And there will be a next time.

It appears as though www.myrecipes.com is doing a redesign of their website.  Because of this, I can't give you the rating of this recipe. I think it was a 5 star rated recipe with about 10-20 reviews.

Posted by the VA foodie at 7:11 PM No comments:

Here are the recipes we're making this week. If you can't wait until I review them you can log on to www.myrecipes.com and get the recipe.

I'll be on hiatus until May 20th because I'll be on vacation.

the VA foodie
VA
I'm a late twenty-something who loves to make cooking light recipes for my family of 2 (plus 2 quadrupeds). I believe that you can make it healthy and still have it taste great. All of the recipes that are 'keepers' get filed into our makeshift cookbook.

All writing & photos on this site are copyrighted by Meghan B. unless otherwise specified.